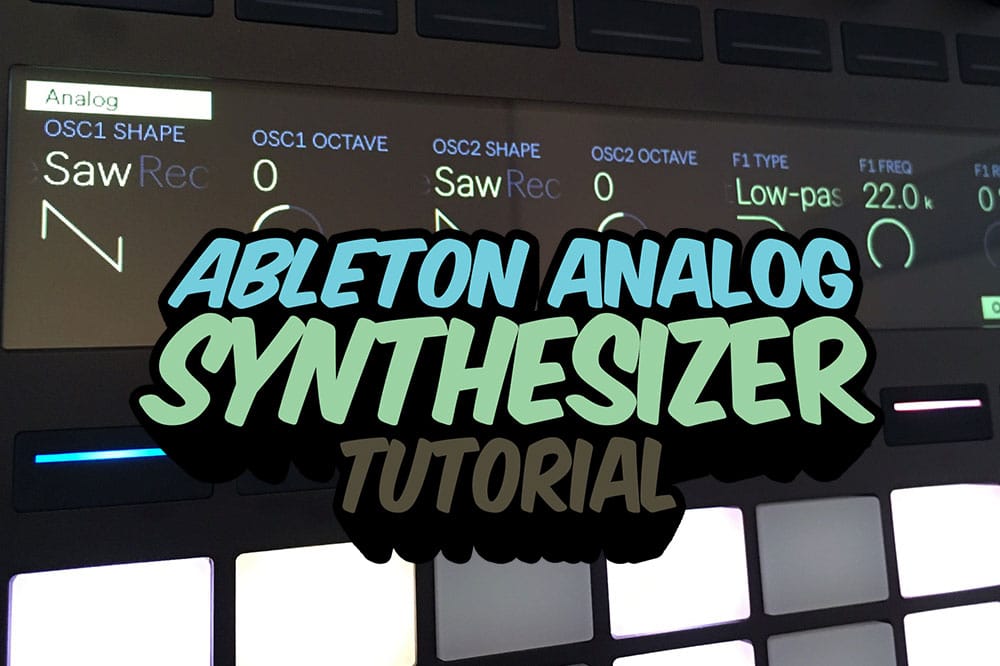 Ableton Live’s Analog synthesizer (introduced in version 7) is an attempt to recreate the vintage sounds of yesterday. Featuring 2 alias free oscillators, 4 Waveforms (sine, sawtooth, rectangle and white noise), two independent multi band filters, 2 syncable LFOs, and a range of other features, Analog easily stands up next to its hardware counterparts.

The Basics Of Synthesis

Every analog synthesizer generates its sounds from an oscillator, the most basic type being a sine wave. These are generated by an electronic signal, and their shape is formed by amplitude and frequency.

All Of This Hertz My Head!

All sound is made up of vibration. One full vibration cycle is known as just that; a cycle. The frequency in which this occurs (how many cycles per second) is measured in hertz (Hz). 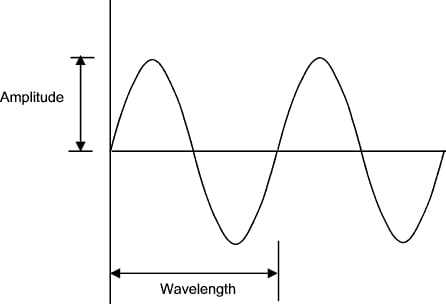 An example of a sine wave. 1 cycle is reached once the wave has reached its lowest point, its highest point, then back to the lowest.

A guitar string being plucked will vibrate thousands of (cycles) times per second. The faster the vibration, the higher the pitch. 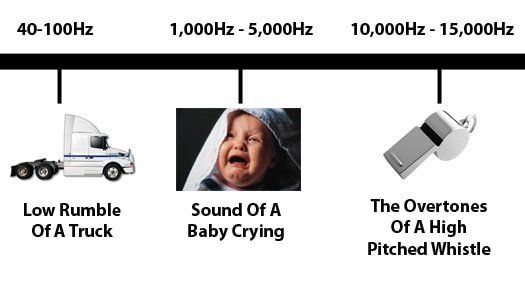 Some common sounds you can associate with on the frequency spectrum.

The Middle A note on a piano is represented as 440Hz on the frequency spectrum (remember, 440 vibrations per second). If you were to generate a sine wave on a synthesizer at exactly 440Hz you would hear a tone that matches a Middle A.

Here is what a pure sine wave played by Ableton’s Operator Synth at 440Hz.

The raw sine wave generatd by Operator. Note the spike at 440Hz.

And here is a sine wave played by Ableton’s Analog synth. Notice the slight overtones.

A sine wave generated by Analog. Notice the extra overtones to the right of the spectrum.

You Have A Real Amplitude Problem

Saws, Squares, And Noise, Oh My!

As I said before, Analog has 4 different wave forms:

Sine Wave – The most basic type of waveform. This has a soft mellow sound to it. This is the only wave form to appear in nature. Although this is not a true sine wave, (Ableton have added some overtones to make it more sonically pleasing) its pretty close.

Saw Wave – Once again, another waveform that is created by combing sine waves together at different frequency intervals. The saw tooth is known for a sharp biting sound.

Square Wave – A square wave is generated by adding sine waves together at different frequency intervals. The sound of a square wave has a hollow reed like sound.

These are automatically generated by Analog through something known as additive synthesis (combining sine waves at different frequency intervals). Your job as a synth programmer is to shape and mold these waveforms through various tools provided by the synthesizer. This is known as subtractive synthesis.

Ableton’s Analog Synthesizer allows you to not only choose from these 4 different types of waveforms, but also mix 2 of them together at the same time.

How To Program Sounds In Ableton Live’s Analog

Now that we’ve got the basics of synthesis out of the way, lets put some of Analog’s features to use by programming our own sounds.

Choosing The Right Oscillator For The Job

Like I said before, the most basic aspect of any synthesizer is its waveform, so start there. If you’re new to programming synthesizers, it’s probably a good idea to stick with one of Analog’s oscillators for now.

You will notice to the left of Ableton’s waveform chooser that there is a Oscillator Level Slider and an On/Off switch.

On/Off Switch – Pretty self explanatory. In order to get sound you have to have at least one Oscillator switched on. The Level Slider allows you to adjust the output of the oscillator.

Octave Section – Once you have your waveform selected, you can choose the octave of the oscillator, Analog has a -3 and +3 octave range.

Semitone Knob – Used to change full note intervals. If you play an A note, then change the semitone knob up +1, you will hear an A#.

Detune Knob – Great when two waveforms are combined together and you tweak both Detune Knobs. This will achieve a fatter sound. Try detuning two waveforms by +0.02 and the other by -0.2.

Filters Are Your Friend

Directly to the right of Analog’s oscillator section is the filter section. This is used to help shape your sound. Activate the filter by clicking on the Fil1 rectangle button.

Ableton has 5 types of filters:

This is me filtering through frequencies with a saw wave through the 24dB low pass filter.

A more visual approach to a low pass filter with Ableton’s Auto Filter.

Bandpass (6dB and 12dB) – This allows only a small amount of frequencies through. Great for honing in on certain frequencies.

Here is a saw wave being sweeped through a 6dB band pass filter.

A more visual approach to a band pass filter with Ableton’s Auto Filter.

Notch (2 and 4 pole) – The same as a bandpass filter, only this cuts certain frequencies.

Here is a saw wave’s frequencies being sweeped through the notch 4 filter.

A more visual approach to a notch filter with Ableton’s Auto Filter.

Highpass (12dB 24dB) – Similar to the lowpass filter, this allows only high frequencies through. Great for dramatic breakdowns when you want to cut the lows out.

Here is a saw wave’s frequencies being sweeped through the hi pass filter.

A more visual approach to a hi pass filter with Ableton’s Auto Filter.

Formant (2 and 4 pole) – This type of filter uses a special type of resonance to accentuate what is know as vowel sounds. Its easy to understand the effect by hearing it.

Here is a saw wave’s frequencies being sweeped through the hi pass filter. Notice the accentuated mid range sounds.

The two most widely used filters are lowpass and highpass. Using the frequency knob to cut the lows out really helps for smoothing out square and saw waves. Using the highpass filter helps to thin out pads and string sounds.

Sweeping through the resonance with the frequency fixed at 500Hz.

An Envelope You Can’t Mail

One of the most important aspect of synthesis is the envelope, and sure enough, Ableton’s Analog has them.

The envelope works with 4 very important parts, the amplitude (A), decay (D), sustain (S) and release (R), or better know as ADSR.

The best way to understand these functions are to use them, but here is a head start.

A great visual example of ADSR in synthesis.

Like other parts of the synthesizer, the envelope sections allow you shape and sculpt certain aspects of the sound. Here are elements of the Amplifier envelope:

Attack – The time it takes for the initial run up of the sound to reach it’s peak. Setting a higher attack time is a technique commonly used with swelling pad sounds.

Decay – If you have a longer decay set, you could imaging it as a flat line starting once the attack has reached its peak, and running straight until it reaches the sustain point

Sustain – This is the volume of the sound during it’s main sequence. Try turning the release al the way down and turning this all the way up. Notice how when you hold the key (or play a note) it holds at full volume EXACTLY up to the point you let go or the not stops. Great for bass sounds.

Release – The point of time it takes for the sound to die down. Play a note on a keyboard and let go, notice the sound will linger for awhile with a higher release setting.

We know there are certain areas of the Analog in Ableton that you can use to control and shape the sound (the filter for example). Well, in synthesis, there is something that take this even a step further: enter the Low Frequency Oscillator.

Remember way back when (the beginning of this article) we were talking about cycles and different wave types? A Low Frequency Oscillator is essentially one of these waves played back at an extremely low frequency (usually 1Hz – 20Hz).

What does the LFO do you ask? Well, it lets you control a specified portion of the synthesizer with one of the wave forms.

Lets say you have a sine wave (see the picture of the sine wave shown earlier). Notice how it has an up and down look to it (it’s a wave, duh). This will be used to essentially control the frequency knob in the filter section for you.

It may be kind of a difficult concept to grasp, but lets use it in a real world example.

You can control numerous parts of the Analog, so feel to experiment. You can get some truly amazing results.

So, now that you are equipped with the basic knowledge of sculpting some pretty amazing sounds with Ableton’s Analog synthesizer, here are three more smaller, but important parts of it.

On the main panel all the way to the right, you’ll notice three buttons underneath the volume knob.

Vibrato – This is a controller that allows you to slightly fluctuate the pitch of the signal through the analog. It gives it a very recognizable wobbly effect.

Unison – This is great for fattening up your Analog. It essentially doubles and slightly detunes any of your oscillators.

Glissando – A smooth transition from note to note. Use this option to get a gliding sound.

I hope I have been able to shed some light on the mystery of synthesizer programming through Ableton Live’s Analog. Sorry I couldn’t cover everything in detail. Please, experiment with Analog, the best way to learn is to experience it yourself. Above all have fun!

If you have any tips or techniques about Analog, please share them below!