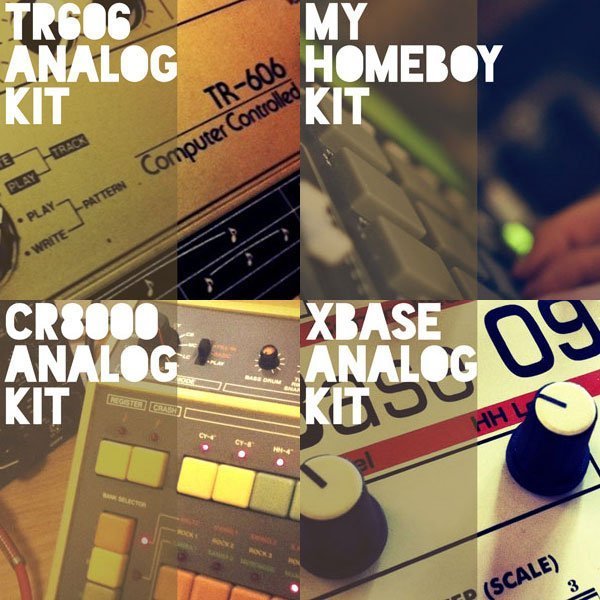 You can get the free download here and check out the previews below:

HelloSamples sampled some of our custom Jomox sounds saved on the memory for YOU! That’s some punchy analog kick/Toms & snares, and some extra hi-hats. We recorded the Jomox direct out to a Neve 8801 preamp. Compression enabled (soft compression). Also, we touched the EQ, boosting at 80hz, and decreasing a lil bit in 3.5khz and 6.5khz.

A Roland CR8000 sample library. 13 analog drums including: kick, snare, toms, open/closed hihats, cymbal, cowbell & congas. The charm behind this machine cannot be captured by sampling the sounds…. It’s the swing/groove feel it has when you perform with the big control knob. The intervals between beats are variable, but also the timbre changes… very nice, especially the hats!

We’ve sampled the usual sounds of a TR-606, but we’ve also sampled stuff that users often forget about this machine. So, what is different about this sample library? -When you clock the 606 to a long tempo you can hear hi-hats and cymbals with a longer release so we’ve sampled these at various speeds. -Also when you play an open and a closed hi-hat at the same time you get a different sound, like a very strong semi-closed hi-hat at much higher volume. We’ve also sampled this.

This kit was made with some of the best vinyl sampled drums, acoustic stuff and analog drum machines we have… a little gem. We have layered vinyl kicks with Jomox bass drums, EQued some snares and claps. Compressed, finally, with the UA1176 for a real analog and punchy sound.

This kit is from the first recording we did with Andreu! it was recorded using a stereo pair X-Y (Rode NT2). The sound was slightly compressed on the MPC. I also put a Jomox analog kick below the acoustic one, increasing the low frequencies… One of the HelloSamples little secret…

We received an old Hohner Pianet T last month. A sort of a low budget Fender Electric Piano (much simpler in its construction and crude in its sound). Jai elFlaco and I decided to lock ourselves in the studio a few nights… see what we could do with it… We recorded 2 tracks and we decided to make a little EP called 2Rocks. We have left the sound of “Martian Rock” track avaible for you!