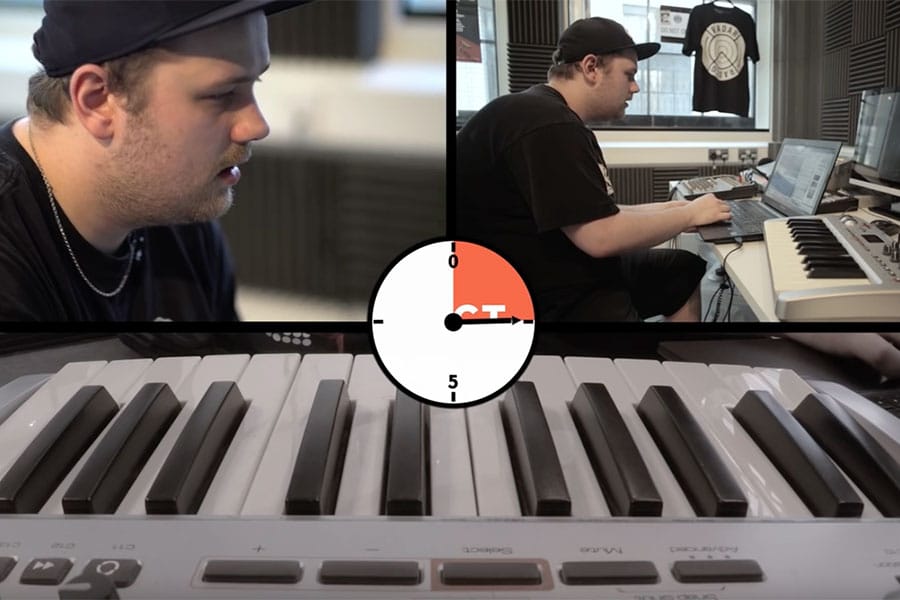 Nick Hook is a New York producer with an endless list of collaborators. He’s produced and engineered tracks for artists as diverse as Novelist, Run The Jewels, Azealia Banks, Hudson Mohawke, Action Bronson and 21 Savage—if you’re an MC and happen to be in New York, you need to check in with him. Our latest Against The Clock session saw us visit the New York studio that Nick Hook works in, for a glimpse of his creative process. In the video he creates a thumping track that made full use of his studio—while barefoot.

Check out the rolling workstation desk, where has his monitor and Ableton Push set up. I would love to have something like this. If anyone has an idea where I can get this, get in touch please!

Oliver Rodigan’s slick No Drama EP earlier this year established the West London producer as an expert bringer of thundering bass rumbles: the kind dripped in murk and menace, lit up by verses from fast rising rap talent Avelino, Kassandra and more. Which is why when we stepped into the Major Lazer collaborator and son-of-David’s studio for his first Against The Clock challenge, we didn’t expect Cadenza to gently jam out a chilled piano-led jam full of tender light-and-shade. The finished article, created in just 10 minutes in front of our cameras, is as stirring as it was surprising to witness: a glimpse at a lighter side of one of the most interesting names in the game right now.

If you keep a close ear to London’s bubbling grime scene, you’ll be familiar with Sirpixalot. The DJ and producer hosts his own show on Radar Radio, makes regular appearances on Rinse FM and is a frequent contender on Mode FM’s Beat Boss series, and last year he dropped his first vinyl release, the Voyager EP for fledgling label Spindark, featuring four of his tightest productions to date. Watch him experiment with a minimal setup as he goes Against The Clock in Radar Radio’s studio, and listen to the finished track below.

It’s not every week on Against The Clock we have a beatmaker as capable on the mic as he is behind the boards. But then, it’s not every week we’re in the presence of Prince Rapid, whose last EP Immortal saw him prove there’s even more to his grime game than the huge Dizzee, Kano, BBK and Wiley productions with which he made his name.

Following on nicely from that release, which saw him rap as well as craft beats, the Ruff Sqwad member ends up freestylin over the beat he crafts here, showing off his myriad skills. The beat’s not his usual creation – rather than grime, it sways almost more towards Afrobeat rhythms. Either way, it’s a knockout. Get a glimpse inside the mastery of a grime originator above, check out the finished track below and be sure to pick up Immortal, out now.

Leeds producer Happa’s cassette-mangling Against The Clock is arguably one of the most inventive and original the series has had so far. Hopping down to East London armed with tapes nicked from his parents, he samples them live, melding weird ambient loops into a intensely dark, murky beat. It’s further proof of the innovative style that’s made him a standout new talent on the UK scene. Let’s just hope his parents don’t get mad when they notice their cassettes are missing.