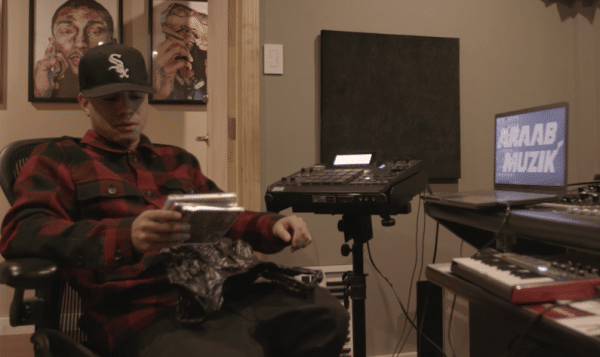 It is no secret that araabMUZIK is one of the sickest beatmaker who ever touch an MPC. If you have the chance to catch him live, you will understand the extent of his talent. So it’s a real gift to have him creating some magic live on this edition of Rhythm Roulette.

Since vinyl is not his thing, araabMUZIK flip the game and blindly pick three cd’s from “Moodies Records” in the Bronx. He end up sampling a track from a “Blue Magic” compilation, a soul group from the 70’s. It’s simply mind boggling to watch him through the process, how he effortlessly construct, layer by layer, an enormous banger! Do yourself a favor and press play!

Araabmuzik made a name for himself by performing beats and instrumentals live and in real time on a MPC drum machine. He uses the MPC to produce rapid, rhythmic drum patterns and creates melodies with samples and other sounds. Araabmuzik’s musical style includes EDM and Hip Hop, with live elements making a significant contribution to his sound. He has performed on the EDM festival circuit and other live club performances. Over the years, Araabmuzik has continued to build his fame through releasing solo instrumental projects, and producing for Hip Hop artists such as Cam’ron, ASAP Rocky, Fabolous, and Joe Budden.