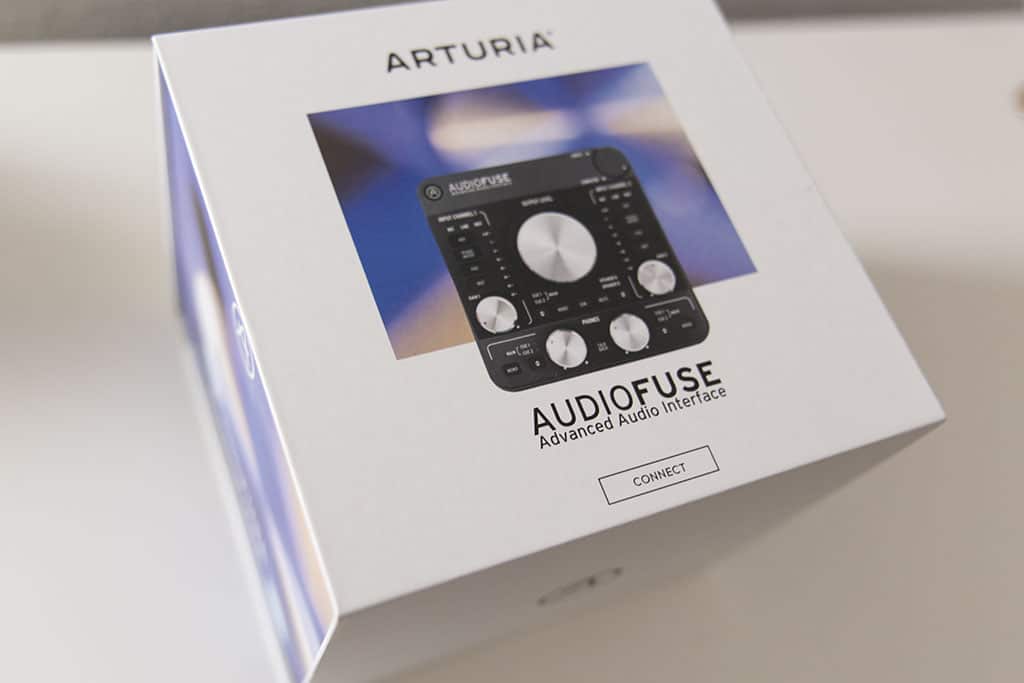 A while ago, french software and hardware maker Arturia shook up the market with the release of their first audio interface. We’ve picked up an Arturia AudioFuse recently and have to say, that this compact little beast plays in a class of it’s own.

Right from the start Arturia are scoring points with this one. The packaging is very Apple like, which makes unboxing exciting! The actual interface is an aluminum cube, well manufactured and feels good in your hands. But that’s where the comparison ends.

Contrary to Apple’s minimalistic product design, the Audio Fuse looks a like an audio interface on steroids, giving you all the main functions instantly accessible over the hardware interface. A nice touch: a slick, leather cover is included which serves as dust and transport cover. AudioFuse comes in black, grey or silver color.

The front panel has two XLR/jack combi inputs. Just plug in the cable and the interface is smart enough to switch between mix or instrument/line channel. Arturia developed a special preamp for the Audio Fuse called DiscretePRO. It’s goal is achieve the warm, round sound of old analog preamps. Believe it or not, we did hear slight coloration on the recorded material – and we liked it a lot! Especially compared to two other rather dry-sounding interfaces here in the studio. It’s a matter of taste of course, so it’s best to test the Audio Fuse out somewhere before buying it.

The separate outputs for headphones are a convenient feature, because you can forgot about your adapters from now on – they let you plug in headphones with big or small jacks. Nice!

The back of the AudioFuse is where it’s at! Turn it around and you’ll see the obvious connections for MIDI, USB and power. Then there are two more Line-Ins and two inserts for external Effects. On the output side, there are two pairs of quarter-inch jacks labelled Speaker A and Speaker B, which can be switched from the top panel. The S/PDIF output can be useful if you have monitors with a digital input. There are even two headphone outputs which is convenient in a lot of home and location recording scenarios, more on that in a bit. Not many direct competitors have this feature!

The built-in phono preamp with ground connector is a particular great addition if you sample from vinyl like I do. Just plug in your turntable without needing to go through a DJ Mixer and keep your cable mess in check!

An awesome, little feature is the integrated USB Hub with three connectors. It works almost like a docking station. I plugged in my Midi Controller, iLok dongle and the mouse. When I needed to rush to a meeting with the laptop I only unplugged the AudioFuse from the laptop. Once back a the desk, plug in one cable and you’re good to go again!

The main interface on top of the Audio Fuse can be intimidating on first approach, but it’s great to have all important functions just one button press away.

You can connect two different monitor speakers and switch between them with the flick of a button to check your mixes on different systems. A welcome addition is that you can switch the Audiosignal to Mono so you can see how big club systems would handle your track.

Even a complete talkback function is implemented, which lets you communicate with an artist while the recording is in session. Press the button and the volume in their headphones goes down and your microphone signal gets send laid on top. You’ve probably seen how this works in professional studios, now it’s built into this little box!

One other neat thing is the Arturia-Button – tap it and the Arturia Control Center software opens on your computer. Press it again and it disappears.

With its built-in speaker switching, mono buttons and talkback, it offers as much monitor control as most of us are ever likely to need.

To get this many inputs and outputs into a little box like the Audio Fuse, some compromises had to be made. The Midi In/Out are only available as mini jacks, but you’ll find adapters for them in the box. You can run the audio interface bus-powered, but it will be in economy mode and some function are unavailable, like the highest audio resolution. It’s a great feature when you’re on the go, but at home or inside the studio you should also plug in the power cable.

The connection to the computer is done via USB 2.0, which seems odd, since there are faster, more performant technologies out there by now. Arturia commented that with USB 2.0 they keep the Audio Fuse class compliant. It needs no special drivers and therefore even gets recognised in the world of iOS and Android!

We had no performance or latency problems when we had the AudioFuse hooked up. The whole session ran smooth, so I think Arturia made a good choice here. We only noticed that the interface gets quite warm – not stovetop hot, but noticeably warmer than other interfaces I’ve worked with.

There is a AudioFuse Control Center software you can install on your computer and gives you the possibilty to configure, route and change settings in every possible ways. The Control Center is where I felt that things can get complicated and thankfully I didn’t really need it in my typical workflow.

The combination of high quality component, amount of inputs & outputs, as well as the small form factor make the Arturia AudioFuse one of the most the exciting audio interfaces in the mid budget class. It works equally well for ambitious beginners and professional producer, who are looking for a compact interface with all the required connections. The sound quality is excellent and you can use it anywhere, like running a home studio, using it live or even with your iOS and Android gear in a hotel room.

Personally I have very simple needs in terms of hooking up equipment, so I found the interface at times a bit overwhelming with all the different buttons and possibilties. If you have started collecting a lot of external gear in your studio or work with musicians in your home studio or on-the-go, I think you have to give the Audio Fuse a go. It’s really like having a swiss army knive in your pocket. You’ll never get stumped when something else needs to be connected to your setup in a session.

The Arturia AudioFuse costs around $600 and you can pick it up at Amazon and Guitar Center.