Arturia came out with their V Collection 8 update at the end of last year. I was super excited to check it out – mostly because of the addition of one new virtual instrument to their already incredible line-up! Let’s look together at the mighty Emulator II V!

The original Emulator II was a hardware sampler introduced in the 1980s by a company named Emu. It quickly became the most popular sample based synthesizer of the time, because it was way more accessible and affordable than other options like the Fairlight CMI.

It was only natural that it found its way onto a lot of records of the time. The Shakuhachi flute sound for example was used in Peter Gabriel’s smash hit Sledgehammer and the Emulator was also a huge part of the Pet Shop Boys sound. Outside of the recording studios, it was probably most famously used in Ferris Buellers Day Off…

Now Arturia revived the classic and did an amazing job recreating the functionality and the sound of this sampler. Let’s take a quick look through the features and jump through some of my favourite presets they’ve included!

When you open up the Emulator II V you will be greeted with a detailed view of the instrument – floppy drives and all! But if you want to dig into the the real functionality of this instrument, you will have to check out the little computer screen above the instrument. It acts as an advanced page where we can do some real sound design work. 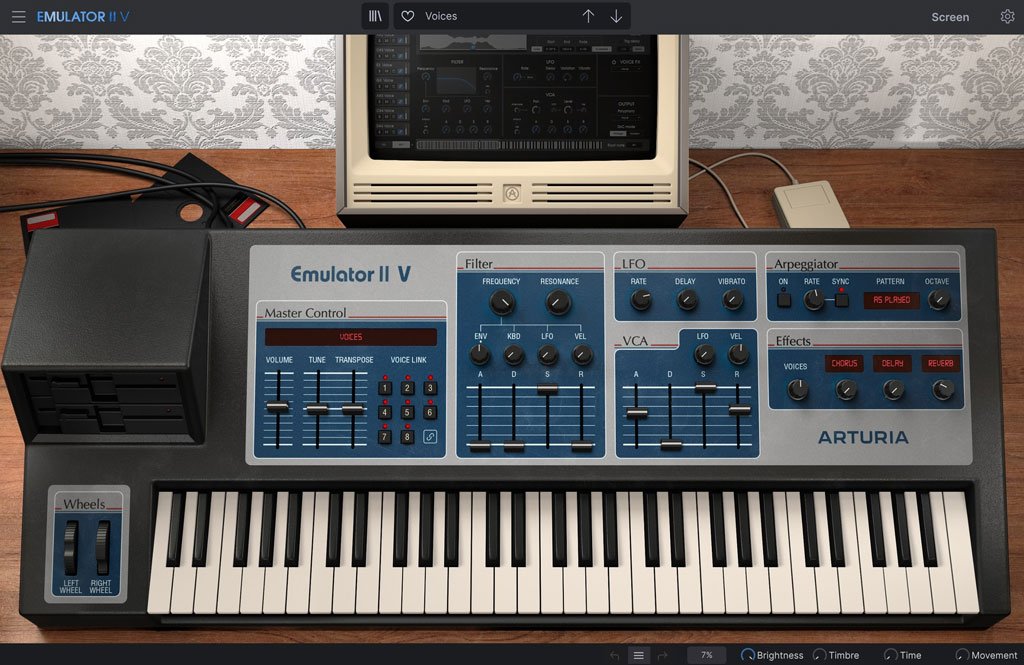 Even though it looks a bit like a synth, keep in mind this is a sample-based synthesizer which uses a sound recording as a tone source. You can play the sample at higher or lower pitches, run it through filters and modify its sound. That means it’s not creating any of its own sounds – it’s playing back short samples of instruments that it has previously recorded. The main draw to a sampler like this over the one in your DAW is the nice vintage, kind of lo-fi sound it has. You can control this by the DAC mode setting in the corner here. 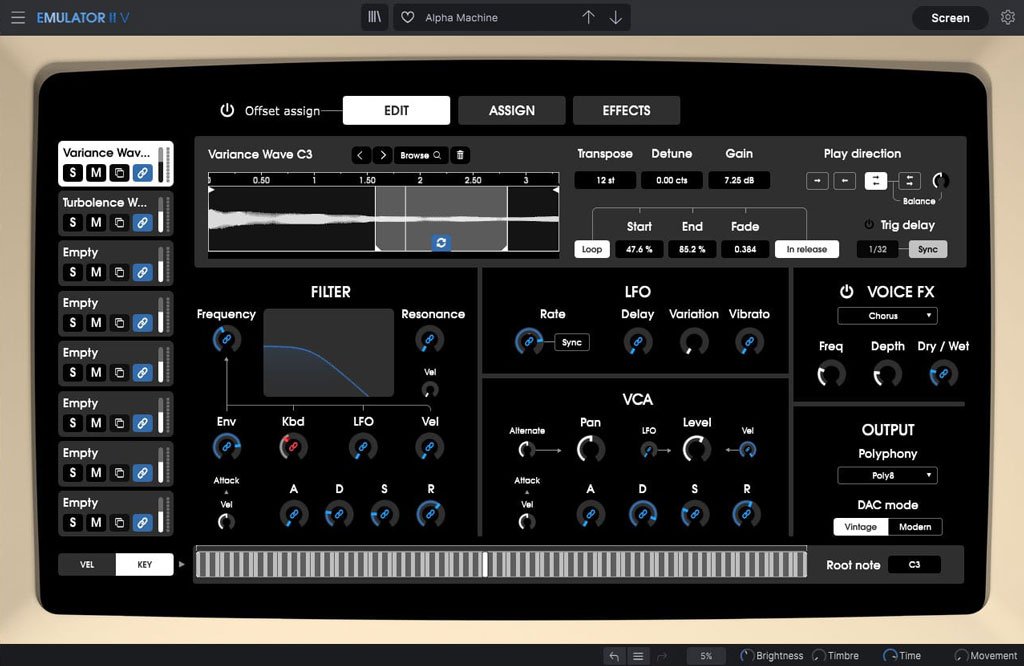 Vintage gives you that classic sound, while Modern gives you a cleaner – more modern – sound. The vintage sound is why I would be using this in the first place so I like to simply leave it on vintage.

The real functionality of the Emulator II V starts on the left with the sample banks. Here you can load in eight samples at any given time and use them in a variety of ways. Each one has a lot of different sample settings on the right that let you dial in the exact sound you want to achieve.

Let’s say you load a string sample in channel one. You can then continue to layer another sound like a acoustic guitar in an octave higher so it sounds a bit brighter and cuts through. You can change a lot of things about how you are using the samples. You can transpose it up and down or even loop a certain section of it.

Of course you have all the standard trimmings of a synthesizer, like a filter and an LFO.  Of course you also have full control over the Attack, Decay, Sustain and Release of each note so we can make them fade in and out as we play them. There’s some incredible layering you can do here in the Emulator II V!

Now you are ready to head to the effects page. Here you have access to a collection of classic effects. By default you have a chorus, a delay and a reverb loaded, but we have all kinds of other effects in here – don’t skip the built in bit crusher. Push the bit depth down a bit and add a little bit of downsampling and turn the mix all the way up to get a really fun lo-fi sound!

Something else worth noting is that the routing method can be either in parallel or in series. Parallel means it goes through each one of the effects separately, meaning you get three separate effect mixes that do not affect each other. They’re all mixed together at the end. On the other hand you can have series mode which is a more standard way of handling it. Here the signal goes through the first effect then gets fed into the second one and then into the next one. This leaves you with one constant stream of audio going through the effect section.

So with all that in mind, you can go back to the main screen which offers a simplified approach to the instrument. We see certain master controls for the whole instrument, like volume, tuning, full access to the filter and envelopes as well as access to our LFO and the Arpeggiator. Finally you have access to the mix of each of our effects as well.

All right so that’s the feature set of the Emulator II V. It’s a pretty standard comprehensive sampler with a fun, vintage sound. I have only toyed with it for a few days now and I’m still learning a lot about it. But having access to all the functionality of one of these classic machines is beyond exciting and highly recommended! To end the review, let’s get into some of the inspiring sounds that are already included with the VST. I love the Marimba and Dirty EP presets, but also classic string sounds are definitely keepers for me!

The Emulator II V is only one of 28 excellent instruments in the V Collection 8. At €599 (or around US$720), this makes it an insane value in my books. You can get it directly from the Arturia website here or from Plugin Boutique here!

PS. After the Mellotron in V Collection 7, the Emulator is another sample based VST from Arturia, so my wish for this year is to finally have hardware sampler from them. SampleBrute anyone? Let’s see it!