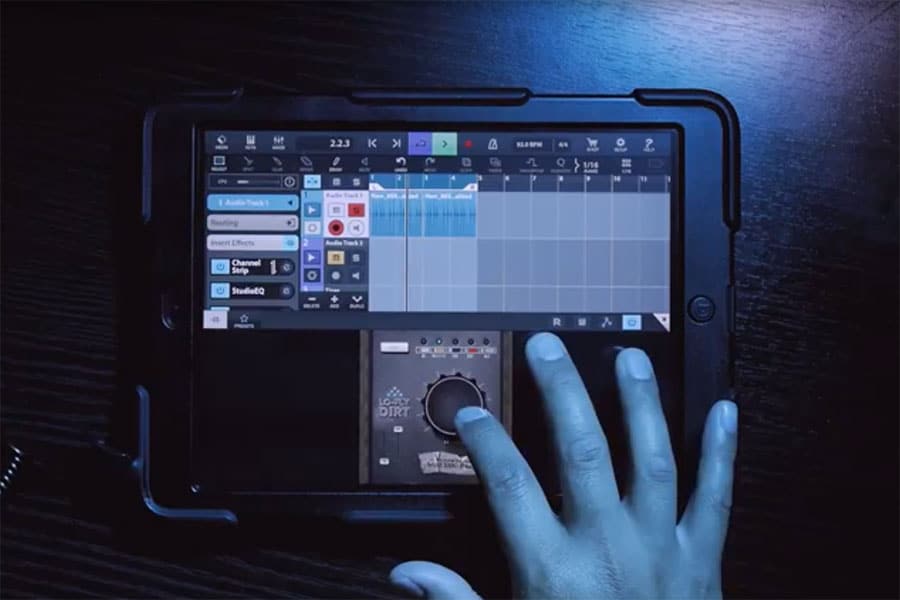 A lot of people are looking for the answer which iOS DAW is better: Cubasis or Auria, BeatMaker or NanoStudio or may be something else… We will go through the most popular iPad DAWs. I don’t want to say here that one DAW is better then the others but to help you decide which one better suite your needs.

However not all the music apps listed here provide even basic features (like for example FL Studio, NanoStudio and Tabletop doesn’t support audio tracks and Auria doesn’t support virtual instruments/midi tracks) we’ve made a comparison of this apps as if you need to choose only one for music production. But a lot of mobile music producers would prefer to use different apps for different purposes.

Auria is first truly professional DAW for the iPad. In terms of audio quality and features (processing audio, mixing and mastering), nothing else comes close yet. Auria was designed from the ground for iPad and with this app that you don’t need desktop DAW anymore – you can do everything on the iPad.

Recording and processing are what make Auria standout. No other mobile DAWs can record up to 24 channels at once, and Auria offers true VST plugins from plugin makers like PSP and FabFilter. Now there is an impressive list of plugins available in Auria in-app store: FabFilters Micro, Pro-C, Pro-DS, Pro-G, Pro-L, Pro-Q, Saturn, Timeless 2, Volcano 2; WaveMachine’s Classic Verb Pro and Drumagog, PSP’s Echo, MicroWarmer, oldTimer, PianoVerb 2. Plus there are built in Convolution Reverb, Classic Verb, Retune, PSP Channel and Master Strips.

All these effects were ported as is from desktop versions so you can expect same high quality of plugins but for much less price (price per plugin defers from 10$ to 30$ which is 3-5 times cheaper then desktop VSTs). Lack of support of virtual instruments is definitely weakness of the app for electronic music production but developers committed to provide support in future releases. One of the greatest features of Auria is desktop style implementation of automation. You can automate almost any parameter of plugins.

Classical multitrack DAW interface with tracks, timeline and audio region and high quality plugins and effects make this app great for live recording, arranging and mixing. There are two main screens: Mixer and Track Editor. Mixing console is intuitive and looks similar to desktop DAWs. For better accuracy turn iPad in portrait mode and you’ll get much larger faders. Multitrack editor is also similar to ProTools/Cubase/Logic approach but it takes some time to get used to gestures to operate with clips.

Beatmaker 2 is the powerfull mobile studio but you could expect something more for the iPad version. Some user interface solutions looks like they just was ported from iPhone without any rethinking on how it should be on iPad. Sequencer and MIDI editor interface looks very similar to NanoStudio and navigation with sliders is not what you are expecting from multi-touch device when you open the app.

Beatmaker 2 comes with two types of instruments: Drum Machine and Sampler. Actually Sampler is very powerful as it supports samples mapping to keyboard regions and multiple layers of samples.

Some workflow solutions are non-intuitive and BM2 is the only iPad DAW I looked for tutorials on youtube (other apps seems to be more intuitive). For example simple operation like pasting audiofile on audiotrack brings me to see 2 tutorials on youtube and only after that I found how to do this.

Steinberg Cubase DAW for desktop has always been one of the best DAWs on the market. And they recently introduced their DAW for iPad which is called Cubasis. Musicians familiar with Steinberg products (or other desktop DAWs like Logic, Sonar or even GarageBand) will instantly feel at home using Cubasis. No need to read a long user manual, everything works intuitively and you can be creative from the moment you start the app.

The user interface of Cubasis was meticulously designed by expert user experience designers and tested on a test group at a German university to ensure the best iPad DAW experience. Steinberg did really good job in rethinking on how classical DAW should work on the iPad and adapted interfaces for touch screen. It works very smooth. Cubasis comes with multi-track sequencer, midi and audio regions editors, mixer and keyboard/pads for virtual instrumtents. I found Cubasis great for composing and arrangement. But it lacks yet several important features like automation, sidechain compression and better effects (most of the effects are good but not on the level of Auria’s VST) to cover all the requirements. Steinberg promised to update Cubasis on a regular basis and they mentioned on the forum that they are currently working on new plugins and new virtual instruments which will be available as in-app purchases.

Cubasis projects can be imported to Cubase (PC/Mac DAW) to work with them on a fully fledged DAW or you can share your mixdown via Email, Dropbox, AudioCopy, Soundcloud. Thanks to the “Split by track” mixdown you can continue working with your project in other DAWs.

To import audio data into Cubasis you can use iTunes share, AudioPaste and iPod import (import DRM free files files from iPod library).

FL Studio is the mobile DAW from the desktop DAW developer – Image Line. Though the interface is a bit outdated and controls are not very intuitive the app sounds pretty good for electronic music. Image Line put nice library of sampled instruments and more instrument are available as in-app purchases.

If you are using FL Studio on your desktop you definitely should buy this app. In other case you can use this app for sketching electronic music: drum sequencer is very easy to use, there are nice instruments and also audio tracks are supported.

But there are several problems that prevent to consider this app as DAW of choice. First its crappy user interface. It looks like they just doubled iPhone screen. For some apps like Figure such approach works fine but not for such complex apps as DAWs. Second is effects implementation – you can’t do any serious mixing or sound processing in the app where you can put effects only on the master bus.

FL Studio has good integration abilities. It can export/import midi and wav files, support audiocopy, email sharing, dropbox, soundcloud and “open in” external apps features. It has virtual midi support but the implementation is pretty strange it sends all tracks data so you need to solo the track you want to send to external synth. Also virtual midi in is working almost fine – I could manage to send Cubasis midi track to play through FL Studio instrument (so you can record it in FL Studio and then send back to Cubasis or BeatMaker 2).

One of the most popular DAWs for iOS. I have seen more finished tracks on soundcloud made with NanoStudio than with any other DAW. NanoStudio was one of the first apps for iPad proved that you can create music “in the box” just on your ipad and it still wins out as the DAW which gets the job done, particularly if you’re into electronic music and synthesis. The official NanoStudio SoundCloud group stands as testament to this with almost 18,000 tracks and counting…

NanoStudio comes with midi sequencer, mixer and 2 built-in virtual instrument: Eden – a great flexible synth and TRG-16 – a sampler controlled by 16 pads. You can’t record or paste audio tracks but built in sampler is pretty good.

Now there are versions of NanoStudio for Mac and PC so you can sync your projects with the desktop version. Also there is dedicated NanoSync Mac and PC software which allows you to transfer samples from desktop to NanoStudio TRG-16 sampler.

Tabletop is nice designed (actually one of the most beautiful music apps for iPad) modular studio for iPad. The app itself is free but most of the instruments are available as in-app purchases.

Each instrument and effect are presented as device. Devices are linked with wires. Similar approach to Reason DAW for desktop. Effects are pretty good. And flexible routing really makes difference. Plus Tabletop compressor comes with sidechain support (which is available only in Tabletop and BeatMaker 2 so far). Built in instruments are not best in class, but you can buy iMPC (if you install iMPC on your iPad you will see it as a device inside Tabletop) and also paste your own samples, built-in sampler is also pretty good.

To make a song you need to use Triggerator device which is patterns sequencer. For each instrument (synt, sampler, iMPC) you create patterns and you can trigger patterns and combine these patterns into a song.

You can’t mixdown track by track – only overall mix. And the mixdown can be exported as wav file, pasted in Audiocopy or uploaded on SoundCloud.

I wouldn’t recommend you to stick to just one app. With different approaches in different DAWs you can definitely get different results.

I personally like NanoStudio instruments but it was a problem of making a full composition without audio tracks and external instruments. But the latest generation of iPad DAWs : Cubasis and Auria makes me think moving from desktop DAWs to iPad.

With Cubasis arrangement and composing is easier and is much fun. And in Auria I can get professional sounding mix (by the way, same plugins for Auria are up to 5 times cheaper then desktop VSTs).

And this year things might change – everybody will support Audiobus, Auria will come with virtual instruments… May be we will see some newcomers (Logic? Reason? Ableton?)… but that would be another story.

Which DAW do you use?