Drake is often talked about among the production community purely on the quality and innovation of his beats. He has managed to stay relevant for so long in the music industry by doing so. In this tutorial, we will create a Drake style beat. We look at BPM, arrangement and basic production tips. By the end of it you will have an understanding of how to make a Drake style beat.

R’n’B is about the space in between, not about rhythmic activity. Drake doesn’t use a lot of saturation or harmonics. His sounds are smooth and very primal R’n’B sounds which lets the artist shine! For Drakes dark, eerie mood with fast moving drums you want to check in between 80-110bpm.

Drake has a special vibe and you can get there with jazzy 9th Chords. Just let them run for a whole bar or two. As for the sound, you want a piano which trails off, because to get the drake sound, we will still need to reverse them. To be able to reverse the progression you need to print it to audio first. For more variations throughout the track, you can switch things up with an inversed chord progression in a different section of the track.

Let’s layer another sound, so we get a fuller sound. Pick something resembling a sine wave – something with not  many harmonics. To make it more interesting, add an LFO modulating the pitch slightly to get some movement / vibrato. Also turn on slide/portamento! You can create tension by moving one note up a full tone. It will sounds slightly off and wants to resolve – that’s a good thing if used sparingly! Also drench this sound in reverb!

I also added a sub bass, basically another sine wave. Something that elevates the emotion of the track and doesn’t take over – no heavy 808s. I also added vocal chop for texture here. If you choose to do the same, go for something melodic not words, then add reverb and a low pass filter. How about some creepy vocal chops in our Trap Ghosts sample pack?

So let’s listen to all the melodic elements in context…


The drums play halftime to make you feel the emotion more. Keep the kick simple – not something textured, just something nice & smooth sounding. They are grouped in a tight double hit, which is typical for RnB tunes. It makes the kick feel active and fast, even though it just hits twice. It makes space for other elements, and doesn’t need much variation throughout the track. The clap is a noisy 808 synthesized clap and hits on the 3 & 7 – pretty straight forward. We use 2 hats here to have some variation. Contrast is really important even within one instrument group like hats. One plays on quarters, one on triplet. The faster playing hi-hat is spaced out, so it happens less…

And that’s a Drake Type Beat! 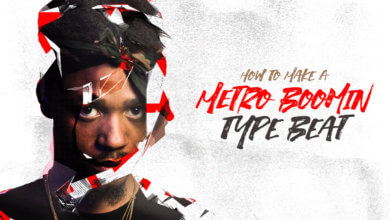 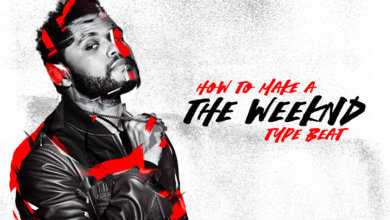 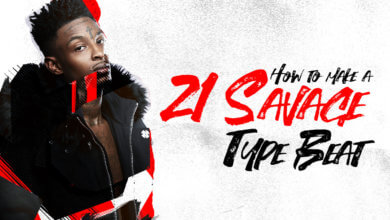 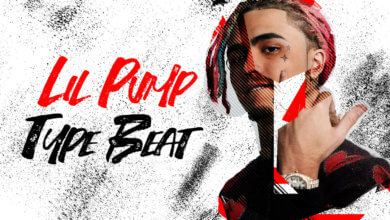