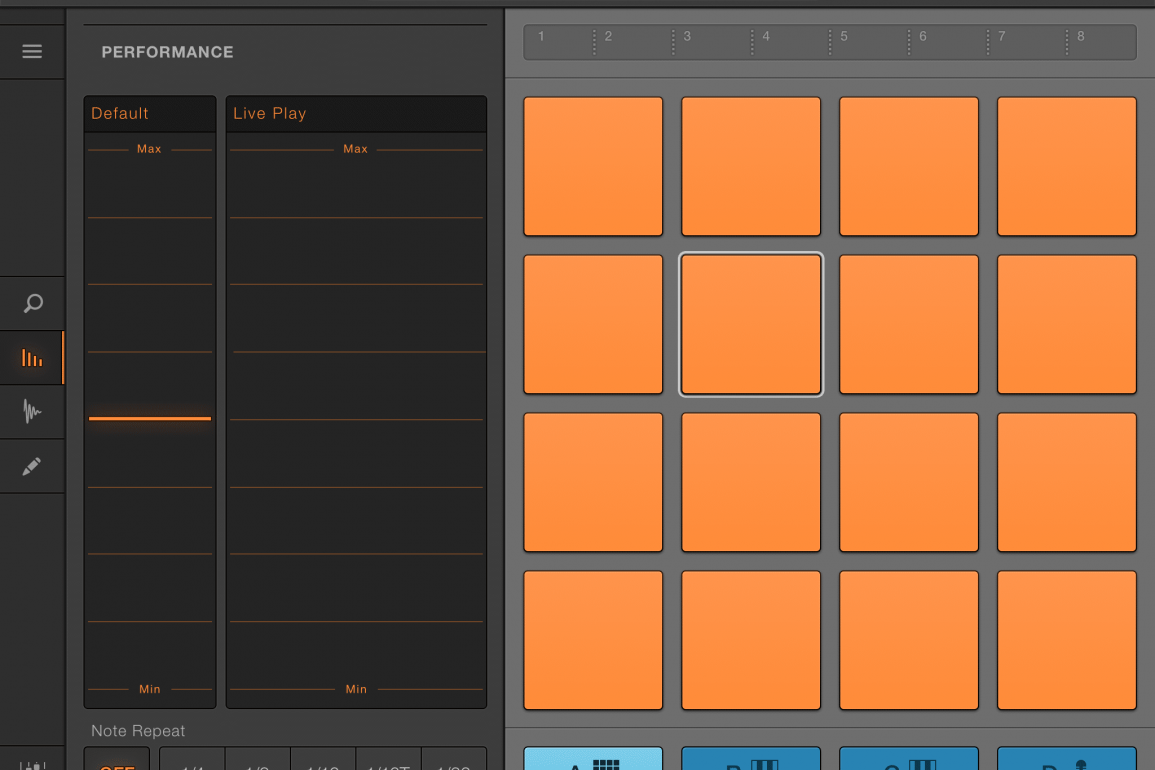 The first thing that jumped off of my iPad screen when I opened Native Instruments iMaschine was the word ‘Sketchpad’. I thought to myself ‘cool, now I can sketch out a few pattern ideas when I’m away from my computer with an application I’m already familiar with.’ That wasn’t exactly the case as it turned out. Don’t get me wrong, iMaschine is a good sketchpad especially if you are new to music making. However, if you’re a pro, you might find it a bit limiting depending on what you are trying to sketch out. I’ll let you be the judge of that. Find out more.

One of the best features of iMaschine is definitely the UI. Those already accustomed to using Maschine will be right at home with the interface. New users will be able to navigate easily around the app. The ‘PERFORMANCE’ window offers the options to set a default velocity when touching the pads directly and to vary the velocity for more expressive playing, both via the velocity strips. The comprehensive ‘sample’ window makes it simple for you to sample from your iPad, iPhone, or iPod touch microphone by touching the ‘RECORD’ button on the top left of the screen. You can make edits to your sample by touching the ‘EDIT’ button. In this window you can change the pitch, gain, pan, one-shot and choke parameters. Touching the scissors icon in the top right corner of the sample screen will let you set start and end times for your sample. It would have been nice if the pads colors mirrored those now present in Maschine 2 in my opinion.

Native Instruments have always had a great reputation for creating superb sound libraries and iMaschine is no exception. Although iMaschine’s library is small compared to other iPad music apps, its quality is top-notch. There are many more included drum samples and kits than there are instruments, which makes it obvious that iMaschine is designed more for beat-making ideas than anything else. Drums are fat, full, and punchy. The instruments will breathe life into your melodic ideas especially if you add effects from the 2 sends per track iMaschine offers. You can also demo and purchase iMaschine expansions directly from the ‘MENU’ dropdown list.

This is where iMaschine falls dramatically short in my opinion. How does a 4 track recorder and 1 pattern sound to you? You can assign each of the 4 groups to be pads, keys, or to the recorder, but then what. It’s a good thing that you can stream the audio output to another app thanks to the Inter-App Audio integration and chain the sound from iMaschine into other apps via Audiobus integration. I didn’t expect to be able to make an entire song in it, but I certainly didn’t expect it to be as limited as it is. The best thing about the sequencer is that it automatically detects the recorded loop length. In other words, it will start looping on whatever bar you stop recording. I wouldn’t mind it if they incorporated that feature into Maschine 2. As I mentioned earlier, there are 2 effect sends per track. You are able to adjust the levels of the sends, and mute them on each track from the Mixer page. You will also find XY performance pads for the 2 effect sends on the Mixer page, but you can’t automate them. Probably the best way to automate them would be to record your movements of the XY pads into another app. I do like the 4 faders for adjusting track volume, also found on the Mixer page. As far as the ‘PATTERN EDIT’ page, you get the normal options; clear, double, you can adjust the pattern length if you want, erase, mute, undo, redo and history in case you want to go back to a certain part in your creation process.

When NI dubbed iMaschine a ‘Sketchpad’, that’s exactly what they meant. This review would probably be longer if I wrote about what features it doesn’t have… 4 tracks and 1 pattern? Really? In today’s competitive iPad music app domain? My disappointment is derived from being an owner and lover of all things Native Instruments for the last 5 years and not seeing any significant product improvement outside of Maschine 2. And while there are some things I really like about it like the XY pads for the send effects, and the mixer faders, I’m afraid NI short-armed this release. Okay, enough with the rant already. I’m sure that Native Instruments has something on deck that will surely blow us away and if the recent interview with NI CEO, Daniel Haver is any indication, it will happen sometime this year. Let’s just hope a major iMaschine upgrade will be a part of it.