If you’re into DJing you probably heard of Mixed In Key. The software analyzes songs and gives you the musical key so you can plan out your DJ sets not just by matching the tempo but also harmonically mixing into the next track. Now they are taking on the producer audience with their new VST plugin Mixed In Key Studio Edition.

With my limited knowledge in music theory I had to hack my way into mixing and matching samples in the past. Also playing instruments in key to other parts of the song took printed note charts, etc. I’ve gone through a myriad of plugins – mostly following along with prolific YouTuber MG The Future and while it was a great learning experience, it never felt intuitive…

Making my first steps in Mixed In Key Studio changed this quickly. Not only is it lightning fast in detecting the key of the song or sample, it also shows you which notes are played most often. Previous hacks had me extracting the midi from a sample and tweaking the results in the piano roll, so I can work with it. It worked but was a bit tedious and uninspiring. With just getting a guide to the notes that are played most in the track, I can simply pick 3-4 of them and jam out a bass line or melody.

My Workflow so far

I open Ableton and load a sample into an audio track. Then I drop the Mixed In Key Studio Edition VST on the track and hit play…

While the sample is playing you get read outs of note names as well as the corresponding key of the sample. 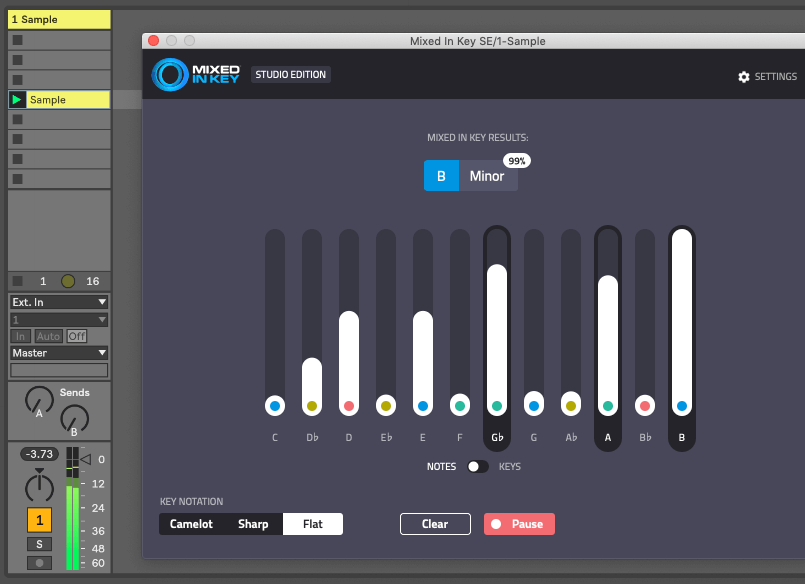 Looking at this, we can establish that the key of the sample is B minor. Mixed In Key is pretty sure about that, which you can see at the 99% certainty just next to the key. So far so good, but not something to write home about.

There’s a lot of plugins that do this, some are even free downloads. What really struck me as significant and reliable workflow hack in the first few hours of trying the software was the note read outs. Other plugins gave me the key of the sample, but with my limited music theory knowledge, I had to chase down the notes that belong to the scale. In addition to that it took some trial and error to find the notes of the scale that are used most often.

Have another look at the screen above – do you think you could write a bass line that is in key with the sample? I started with Gb, A and B and tried to come up with something interesting.

I settled on the following notes A, B, Db and E and it sounds like this (headphones recommended to hear the sub bass). Sure, there’s more interesting approaches like the pentatonic or blues scale, but if you want to just build out an idea, this is all the info you need. Last but not least here’s the sample with bass as well as an additional melody line based on the findings of Mixed In Key Studio Edition. I added a drum loop to make this sound more like a proper song:

This literally took 5 minutes to put together and would serve me as starting point for the song. I might chop the sample differently, tweak the groove of the bass line, add break downs, etc, but with this loop I’m ready to start my arrangement. All it took was one click in Mixed In Key Studio Edition to get enough info put down a solid beat idea. Dope!

Sidenote for DJs: A neat little feature is the possibility to switch between Flat/Sharp and Camelot notation – the basis for harmonic DJ mixing. To keep it simple you can think of it like the circle of fiths, but instead of arranging keys like C, F, G, A, etc and it’s a numbered system. A sample in 4A simply goes well with another sample in either 4A (duh!), 3A, 5A or 4B. DJs who work with the Mixed In Key DJ software will most likely be happy campers, because they can easily create edits or mashups from their previously analyzed DJ library.

The Future is Here!

I’m blown away with where things are heading. Between Mixed In Key Studio and Serato Studio (my first impressions on that will be published shortly), there’s really no reason to put out subpar beats anymore. You’ve got all the tools at your fingertips to create professional beats in no time and without having to study music theory or spending a lot of money on complex plugin chains.

Compared to some other alternative plugins I have used in the past, Mixed In Key is just damn fast! I like the clean, organized look and I find results are usually spot on. This is not to say that Mixed In Key is always right, but if you are in the market for a key detection software, this one is your best bet! Mixed In Key Studio is available now from https://mixedinkey.com/studio-edition/ for $59 and in my opinion it’s worth every cent.