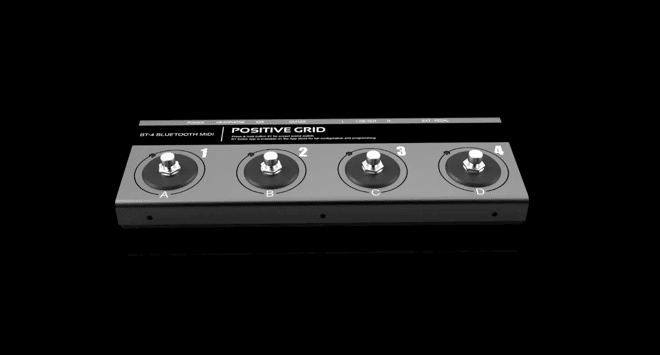 “Mobile devices have changed the landscape and brought new possibilities to many working musicians,” said Jaime Ruchman, Marketing Manager at Positive Grid, “and they’ve been asking for a foot controller that is extremely solid and easy to use and which provides a live-ready solution. The BT foot controllers are the answers for that.”

Users of JamUp, BIAS and virtually all other MIDI-supported apps will be able to switch any parameter in the way they need without connecting cables: Guitarists can change stomp box effects in real time, bassists can smoothly switch their volume, and vocalists can quickly turn sheet music on a screen. The BT foot controllers allow JamUp users to virtually stomp on JamUp’s live screen and switch between dozens of studio-grade amp and stompbox effects — all hands-free. They also allow them to control Jam Player’s iTunes song-playback functions, trigger various sampler recording and dubbing options, and even control the built-in metronome and tap out the tempo — all without the need to touch the device screen.

Positive Grid’s BT-2 and BT-4 foot controllers are MIDI foot controllers based on Bluetooth 4.0 technology. They allow users to assign MIDI messages to the controllers by using an iOS app that edits the assignments. Each and every MIDI-compatible iOS app supports a standard communication protocol that enables them to be controlled wirelessly. These apps can be from the Positive Grid family of products – JamUp XT and JamUp Pro XT — or any other MIDI-compatible app or desktop software such as GarageBand, OnSong, Auria and so forth. Both BT pedals can be expanded by adding an expression pedal or footswitch using a ¼-inch phone-type jack, allowing musicians to control rotary functions like whammy and wah effects, keyboard sustain, amp gain and volume, EQ and more.

Superior and unique design
The option of having two differently sized Bluetooth MIDI Foot Controllers allows musicians to choose between a 4-button controller set for full wireless performance when recording and performing or a convenient, ultra-portable 2-button controller set for backstage use and day-to-day rehearsing. Both controllers are designed to fit in a backpack or even a laptop bag, and with its solid metal structure — this is unique in this product category — both controllers will withstand any live performance demands even in the most extreme situations. Independent LEDs are also included for each of the controllers’ footswitches, making visual monitoring easily visible under any lighting conditions, including dark stages.