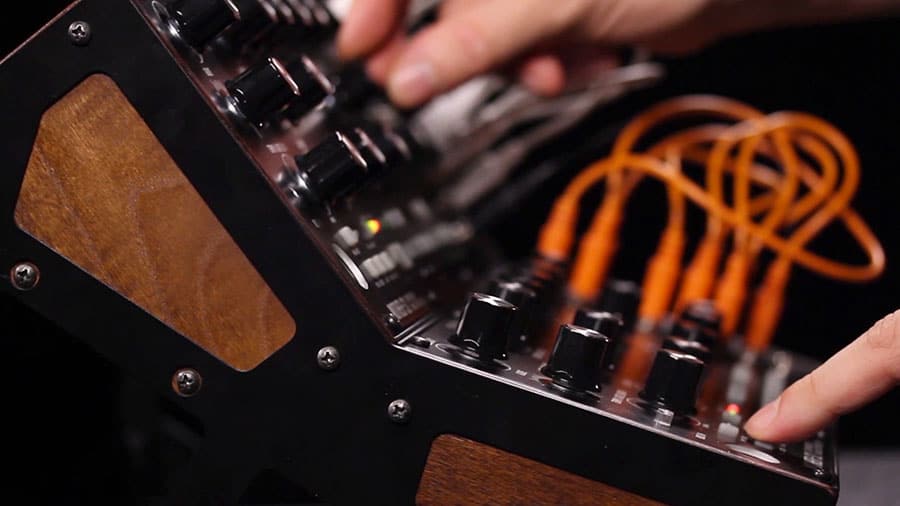 It doesn’t matter if you just bought your first hardware synth or you’re dabbling in soft synths like Native Instruments Massive or Xfer Serum. While there’s thousands of great presets for Serum and Massive, a general understanding of the principles of sound synthesis goes a long way, if you don’t want to stick to the factory presets or spend money commercial preset packs.

The basic components of a synthesizer are sound sources (oscillators) and modifiers (filters, envelopes etc), which make these simple sounds more complex.

An Oscillator or VCO produces the basic waveforms of sine, square, pulse and sawtooth, each with its own distinctive synth sound. These waveforms can have different frequencies, usually from 0 to 20,000Hz (Hz = oscillations per second). Having two or more oscillators playing waveforms on top of each other is called “additive synthesis.”

Unison is a kind of additive synthesis, where the synth generates multiples of the same wave form, all slightly out of tune with each other, to create a broader, richer sound.

Filters or VCF (voltage controlled filter) modify a synth sound by taking away certain frequencies and adding emphasis to others. A low pass filter (LPF) takes out certain high frequencies and mellows out the buzzy oscillator. A high pass lter (HPF) does the opposite. A band pass (BP) cuts out low and high frequencies around a certain middle band. The “cutoff” of a filter determines the frequency where the modification begins. The “resonance” affects the sharpness of the modification.

The amplifier (VCA) is the last step in the path of an analog synthesiser. As the name suggests, it sets the output level. Usually it comes with an envelope generator which lets you shape the sound further.

Envelopes shape sounds over time. They usually control either the volume of a sound or the amount it is affected by the filter, from the time a note starts to the time it stops. The basic parameters of an envelope are: attack, decay, and release, together are often referred to as ADR. Sometimes an envelope will have a sustain parameter (this is an ADSR envelope). Sustain determines how long a sound holds at a given volume after it has decayed.

LFO (low frequency modulation) and Cross Modulation occurs when one waveform alters a parameter of another — either the pitch, the volume, or the action of the lter. This can produce tremolo-type effects (waveforms altering volume), vibrato (altering pitch), or sweeping sounds (altering the lter). If the modulation is happening at a rate of about 20hz or lower, it’s considered LFO.

Polyphony refers to numbers of notes that an instrument can played simultanouesly. A monophonic instrument can only play one note at a time, Brass instrument, the human voice or classic synths. Polyphonic are capable of playing multiple notes at the same time, which lets you play chords. Piano, Guitar, etc. Monophonic instruments often offer legato playing. This means ‘connected’ – you play a series of notes without retriggering each note, the sound sustains, but only the pitches change. For this to work, you will have to play overlapping notes.

Glide is like Legato but changes pitch more gradually. If legato is performed on real instruments, its common that the performer slides from note to note. You can hear that often in brass instruments. On analog synth this feature is either called glide or portamento. It sets the time it takes for the pitch to slide from one note to the next note in a legato phrase. Smaller glide times are great to mimic real instruments, while longer glide times can be used for special effects and distinctive lead lines.

There are two distinctive school of thoughts in synthesis design and sound generation.

East Coast Synthesis also known as subtractive synthesis refers to the traditional Moog style synthesis. It’s the classic design, where the starting point is an oscillator that provides a complex wave, like a sawtooth or square containing a wide range of harmonics. A filter, most commonly a low pass is tweaked to mellow out the buzziness and create a more harmonic balance that’s closer to acoustic instruments. If you combine the oscilator & filter with other modules like ADSR envelopes, randomisation, etc you can create a sheer unlimted variety of useful synth sounds.

Moog synthsizers were among the first commercial synths and founder Bob Moog is generally credited to bring analog synthesizers to the masses. Moogs original releases were in modular design consisting of seperate electornic modules. What made Moog synths stand out was their sound. Particularly the infamous 24db ladder filter which is credited for its fat & juicy sound is still unmatched to this day. Eventually Moog packaged these elements into a prewired and assembled and paired it with a keyboard to create the iconic Minimoog, which was the first portable prewired synth and possibly the most popular synth ever and are still widely used today. Other classic distinctive synths you should check out are: ARP2600, Sequential Circuits Prophet 5, Oberheim SEM OBX.

West coast synthesis follows the design of Don Buchla, who thought of synths not as devices to imitate traditional instruments but as tools to create more unusual timbres for experimental music. His approach focusses more on frequency modulation and waveshaping and is also known as additive synthesis. The outcome is always dependent on the original waveform, so in additive synthesis you dont start with a complex wave, but you build it from scratch using sine waves. The additive synths are more likely found as digital plugins, while subtractive synths are more common in both analog and digital because their distictive sound and ease of use.

When digital technology arrived to the synth market it offered new possibilities of creating sound. One of these methods is FM Synthesis, most notably used by the Yamaha DX7. FM stands for frequency modulation, which generates rich waveforms. Instead of a clean oscillator waveform, FM synth uses pairs of sinewaves, where one frequency modulates the other. this creates a complex set of new overtones, resulting in a more metallic tone which you wont find in analog synthesis. After being overused in the 80s, FM Synthesis fell out of favor, but it came back in NI FM8 and a variety of other virtual synths

Digtial synth that uses a string of short of one cycle waves for its soundsource. These miniwaves are arranged in sequence forimng the so called wavetable. Each wave has its own distinct shape and timbre. When a note is displayed the synth runs through the waves and creates rich, shifting tones, that can have a great variety of different colors. more known for edgy, industrial sounds. great as alternative to traditional synth sounds. Most notably is Serum, arguably the most popular soft synth today!

Aside from classic analog synths…

With preconfigured synth growing in sales over the years, there has been a resurgence in the classic modular design of synths, thanks to the Eurorack standard. Beginning with a modular system by German company Doepfer which was designed together with Kraftwerk became the Eurorack standard back in 1996. The available number of modules has grown exponentially. More and more companies enter the market with recent entries by Arturia and guitar pedal company Strymon. Putting together a modular synths can be daunting for beginners, both in terms of complexity and cost. If you decide to take the jump, then you’ll find vibrant communities at Muffwiggler & Modulargrid.

While most synths come prewired. With modular synths you have to connect the seperate modules manually to create a sound. You have probably seen these in a few videos already, since they are hard to miss with all sorts of colorful patch cables sticking out from them. If this looks to scary to you, a semi modular synth like the Minibrute 2 or or Mother 32 are great places to start your journey into modular synths.

A virtual or software synth can be an emulation of a hardware model or completely reimagined. While phsyical synth still go strong, new virtual synth are released at a crazy rate of with innovative features that can only be achieved in the digital world. The emulations of older hardware try to model the sound and qualities of the original synth, but often add more functionality, like adding polyphony to a monosynth. While they come close to sounding like an an anlog synth, most people still swear by the sound of a real hardware analog synth. The biggest downside in my eyes is that you won’t have the intuitive hands on control, even if you map a midi controller to it.