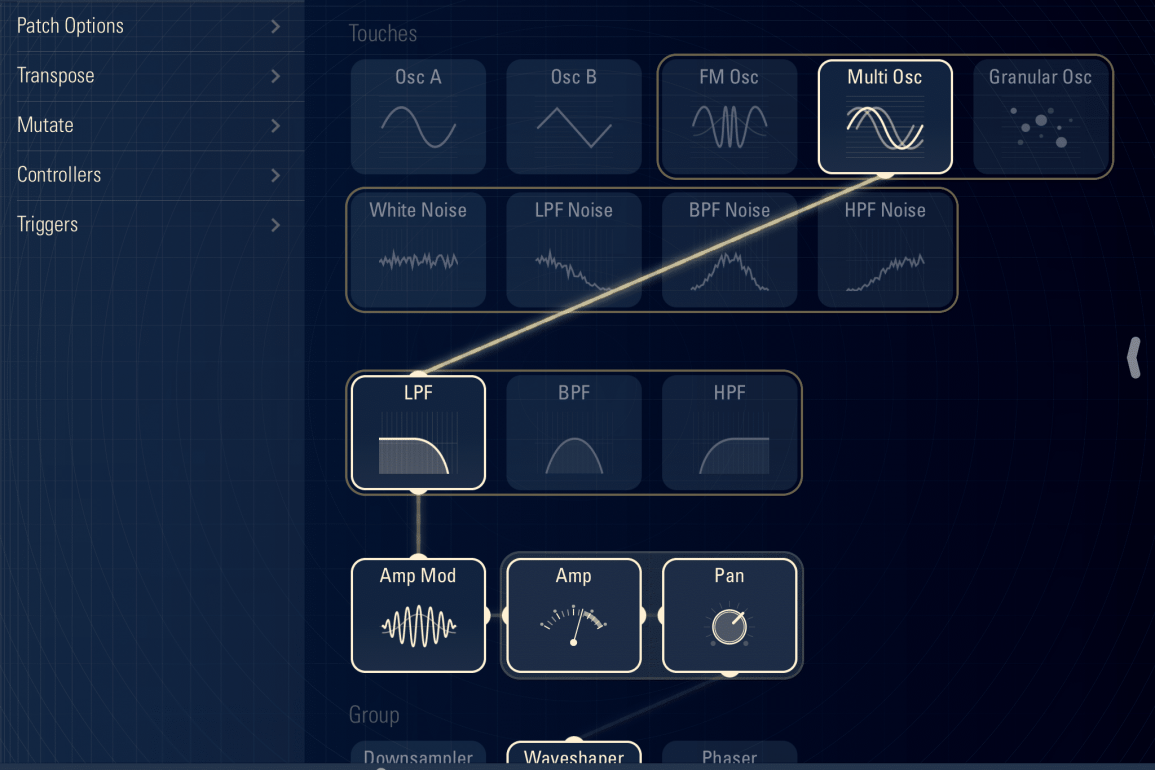 I don’t know what inspired Kevin Schlei to sit down and figure out how to maximize the full potential of what a synthesizer could do on an iPad. But, for whatever reason, all of us synth nuts should be glad he did. This man started Bit Shape Software in 2010 and went on to create the most innovative iPad synth I’ve ever reviewed up to this point, the TC-11 Multi-Touch Synth, which has been recently updated to version 2.0.

The update adds features such as: a Granular Oscillator, new patch editor with drag-and-drop controllers, a new synthesis engine, a new Table module, and more to an already outstanding synth application for the iOS platform. My gripe here is that an Android version is non-existent as of yet, but hopefully Bit Shape will see the light and make an Android compatible version. Let’s get into it.

Cons:
• It’s a little tricky getting to the presets at first, but that’s being nitpicky.

The sleek minimal design of the interface is fantastic for those who want to run through the presets and interact with the multi-touch controllers and device motion features. On opening, TC-11 defaults to the ‘Sublime’ preset with a lovely sea-blue background highlighted by a series of circles that resemble waves when a rock is tossed into water. No matter where you touch, a brighter circle emphasizes your finger positions to give you an idea of how you are affecting the sound. On the upper left corner of the screen, you’ll see the Quick Load icon. Double-tapping this will display a list of the current group of patches for easy preset browsing. The Quick Load drop-down can be closed by either touching the ‘X’ button or any other button visible on screen at the time. On the lower right of the screen is the Navigation Bar icon. Double-tapping this will bring up the Navigation Bar on the bottom center of the screen allowing you to switch between 4 different views: Performance, Load/Share, Patch, and Settings. Each view has a different set of features with which to control playing, edit and share, or change the app settings. When in Performance view, the app will prevent the device from rotating so you can use device motion controllers.

Sound designers will probably get lost in the Patch view. This is the area where all of the sound creation and parameter editing is done and it is chock full of options. Don’t forget that every synthesis parameter can be controlled by any multi-touch parameter, as I listed in the ‘Pros’ section earlier in this review. As Bit Shape Software says on their website ‘the possibilities are limitless’. True indeed! When was the last time you played with an iPad synth that boasted among other things, an FM, Multi, Granular and 2 standard oscillators, filtered noise generators, an amplitude modulator, low-pass, band-pass, and high-pass filters, a Downsampler, Waveshaper, Phaser, LFO, AHDSR, Table, and Sequencer modules. And this is just scratching the surface. TC-11 is such a robust and deep application, that Bit Shape Software had to include a comprehensive 92-page pdf manual to accompany it. The pdf manual can be freely downloaded from their website which I will post below.

With an iPad synth that has so many editing possibilities, you can imagine the sounds that come out of this thing. I can’t begin to tell you what I heard when I started messing with the various controllers and touch gestures. It’s simply immaculate. All 120 built-in presets were created using the TC-11 itself. This is great because no effort was made to try to model any hardware synth and it gives an honest representation of what sounds TC-11 can generate. I only managed to go through about 10 presets myself because I was having so much fun creating, editing and routing presets.

Kevin Schlei took the ball coast to coast and threw it down big time with TC-11. It would take me far too long to try and explain every single feature, it’s too deep of a synth to understand it all in one sitting. At $24.99, it might look a bit pricey for an iPad synth, be I’m here to tell you that it’s worth far more than that in my opinion. The potential to make new interesting sounds is through the roof, and I’m excited to see what Bit Shape Software creates for us in the future. Anybody reading this should go grab it right now, you won’t regret it.