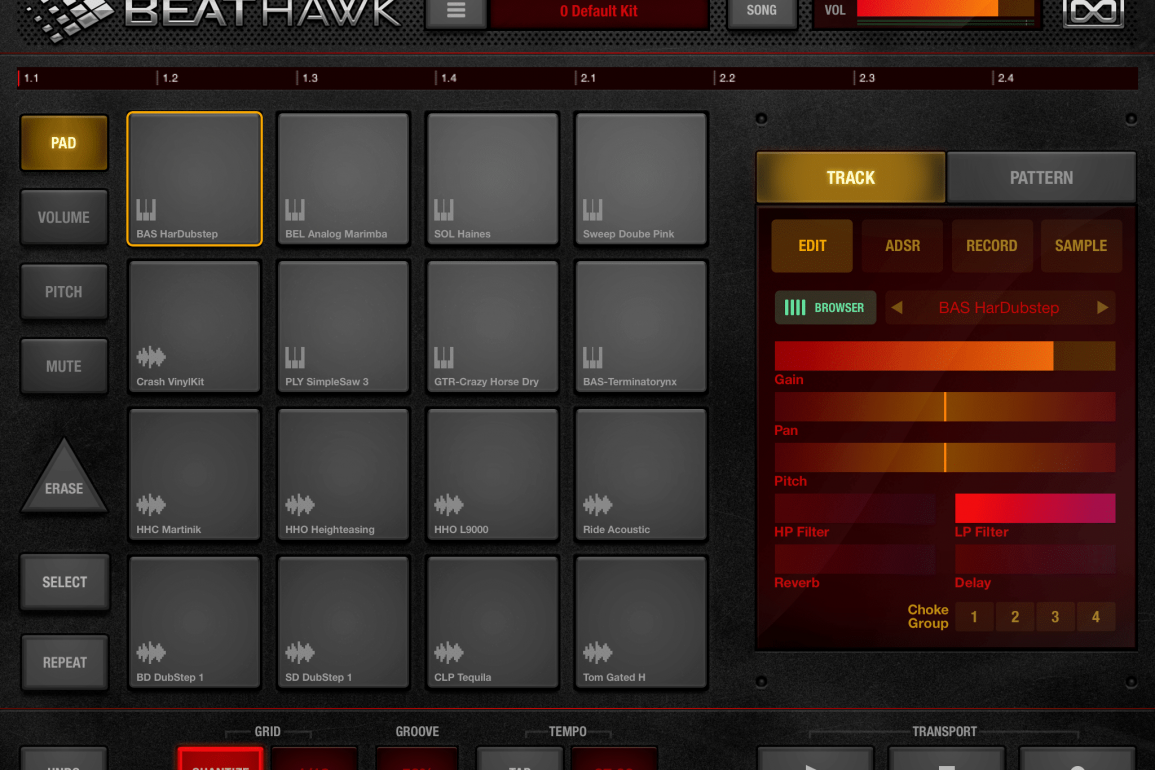 When I found out several months ago that UVI were going to throw their hats into the iPad App arena, I became anxious and excited about it. If you are aware of the high quality standard that UVI is known for, Beathawk won’t disappoint. UVI has dubbed this a “portable music production studio” allowing you to create and finish a complete song, and export the stems, stereo wav file, or midi file. It’s loaded with a host of clever features, a generous sound library, in-app purchases and the ability to demo expansion libraries right from the sound browser. I really like the interface, but I don’t think it’s intuitive for beginners who are unfamiliar with how a DAW works. That said, Beathawk isn’t an iPad DAW and as mentioned earlier UVI isn’t claiming it is. But it is certainly a fun and useful alternative to get your ideas out while you are on the go. Let’s get into it!

Get it from the App Store.

The reason I like this interface is because it doesn’t have a lot of different windows to sift through. There are basically only two windows, one to create your patterns in and a ‘Song Mode’ to piece together those patterns into a full song. Even if you count the keyboard mode by touching ‘Pitch’, you still only have 3 windows to deal with. And all the available options are easy to get to on each screen. The main screen that you will be creating on gives you the normal 16 pads which also serve as multi-sampled instruments depending on the sound you select on a pad. For example, if you select a Bass sound on a pad, touching the ‘Pitch’ button will change the drum pads into what I call ‘key pads’. This will let you play different notes on that particular instrument. To the right of the interface you are given several options to edit each of the 16 tracks such as the Gain, Pan, Pitch, HI & Lo Pass Filters, ADSR Envelope, Choke Groups, and more. Touching the button labelled ‘PATTERN’ will allow you to set the length of your pattern, copy & paste, or clear your pattern. A touch of the ‘SONG’ button takes you to the window where you put your patterns together to form your song and export them. Basically, if you are familiar with how production workstations and DAWs work, you will have no problem getting around.

As you know, UVI always produces great sounding instruments and samples. You can rest assured that they haven’t cut corners with Beathawk. You get EDM Factory and URBAN Factory libraries included with over 2,000 samples, 290 presets and lots of loops. In addition to that, you can listen to the demos or purchase any of their ever-expanding libraries directly from the sound browser. The sounds, samples and loops are top-notch and I like the fact that you can edit the sounds, but I would like to have seen more editing options such as automating the lo-pass filter with an LFO. But the sounds are so good already that you probably won’t want to do too much editing to them.

I think you will enjoy the flexibility of the sampler. All of the included loops can be edited and played like Rex Files or you could make use of the real-time time stretch feature. It is still a mystery to me how an iPad app can have a comprehensive real-time time stretch feature, but Maschine 2 doesn’t. But that’s another story. Beathawk enables you to set input levels and sample directly from your iPad’s mic, set start and end points, and use the ADSR Envelope per pad. My only problem with the sampler is that the screen is too small. I would like to be able to blow up the screen to see a more accurate representation of my loop for editing. Maybe this will be one of the improvements UVI will make in subsequent updates.

This is so slick! First of all you can quantize using a multitude of grid settings, the note ‘REPEAT’ feature depends on the grid value you select which is normal in most music applications. You can also change sounds while your pattern is playing which is a feature I think every app of this kind should have, and you can ‘UNDO’ in case you replace a sound you don’t like and want to go back to the previous one. There is ‘TAP’ tempo, ‘VOLUME’, ‘MUTE’ but no solo button. ‘PAD’ is of course for playing in drum sounds and the ‘PITCH’ button as mentioned before, brings up a representation of keys in order to play melodic phrases. I also like the ‘SELECT’ button which allows you to select a pad without hearing it and is a very handy feature to have in a live situation. The thing that sets this sequencer apart is the Song mode. Although there are only 16 tracks, you can mute parts of your pattern without affecting the other patterns and this is a major feature in my opinion especially with the track limitation. For example, let’s say you have 1 pattern and you want to use it again but without the snare. In Song mode you can copy and paste the pattern, mute the snare and it will not affect the first pattern. Your original pattern will play with the snare in it. This feature, in a way, expands your included 16 tracks and is a very clever inclusion in my opinion. However, I would like to see more song editing features such as note nudging, velocity editing and volume automation in future updates.

End of the day…

UVI has a winner with this one. I just hope they continue to support and improve Beathawk because it has an abundance of potential to grow into a heavy hitting product. It is a great app as is, but I am excited about what the future holds for Beathawk. I’m sure UVI will provide even more inspiring updates as they make they foray into the iPad App arena.